Colin Kaepernick: From less than half a season as starting QB to Super Bowl 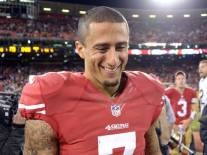 Despite only nine career regular starts at quarterback (seven regular season and two playoff), the legend of second-year San Francisco 49ers QB Colin Kaepernick continues to grow. With a start at QB in the Super Bowl just under two weeks away, Kaepernick can certainly write his name in the record books with a Super Bowl victory.

But just taking the field as the 49ers QB will be enough to put Kaepernick in special company. Consider this: Kaepernick will become the fifth starting QB in Super Bowl history with less than half of his team’s regular-season starts at that position. Kaepernick started seven of the 49ers 16 games, replacing an injured Alex Smith in the 10th game of the year. He led the 49ers to a win over Chicago and never relinquished the starting position. San Francisco went 5-2 in the games he started at QB.

Here’s a look at the four QBs before Kaepernick who started less than half their teams regular-season games in a year when they started at QB in the Super Bowl.

Note: Two more Super Bowl starting quarterbacks started only seven games in the regular season before their Super Bowl start: Len Dawson and Terry Bradshaw. For both Dawson and Bradshaw, those seven starts represented exactly half of the games the 14 games their teams played that season.

One more note: Of the 92 starting QBs in the 46-year history of the Super Bowl, 46 (exactly half) started all of his team’s regular-season games that season.