One of the big motivators for a successful regular season in the NFL is so teams can not only make the playoffs, but that they can win enough games to maybe receive a first-round bye and/or get a home playoff game or two. 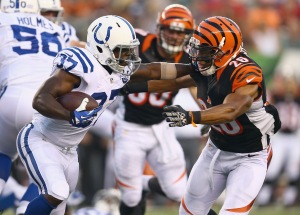 The host Philadelphia Eagles lost 26-24 to the New Orleans Saints in their Wild Card contest. It was the eighth home playoff game the Eagles have lost since the start of the Super Bowl era, tying them with three other franchises for most home playoff losses since 1966. Here’s a look at the number of home playoff losses for each NFL franchise.

Looking at the games for this upcoming weekend, we see that the four teams hosting these games have had pretty good success as a home team in the playoffs. Carolina has a 2-1 record as a playoff game host; Denver is 13-4; New England is 14-4; and the Seattle Seahawks are 7-2. New Orleans, San Diego and San Francisco each proved they can win on the road in the playoffs as they were victorious last weekend as road teams; we’ll see if they can continue that this weekend. The lone home team to win last weekend, Indianapolis, last won a playoff game on the road on January 13, 2007.

* The New England Patriots have the record for the most consecutive home playoff wins. From January 5, 1997 to January 20, 2008, the Patriots won 11 straight home playoff games, the longest home winning streak in the playoffs in the Super Bowl era.