Do Eagles, Redskins have the recipe for beating Super Bowl champs? 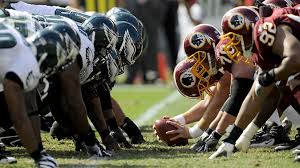 But one thing these two teams seem to have in common is that they have figured out a way to beat the teams that eventually win the Super Bowl.

Here’s a look at how many seasons since 1990 (23 seasons) that a team won a regular season game against the team that eventually won the Super Bowl that year.

The Broncos and Seahawks each lost three games this season: Denver lost to Indianapolis, New England and San Diego. Seattle was defeated by Indianapolis, San Francisco and Arizona. Both Arizona and San Diego have not defeated an eventual Super Bowl champ in the regular season since 1990, but that will change this year since the Chargers beat Denver and the Cardinals beat Seattle.

Note: The Eagles and Redskins each faced the Denver Broncos this year, both losing to the AFC West champs. Denver beat Philly 52-20, while the Redskins fell to the Broncos 45-21.