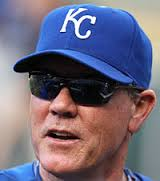 The Kansas City Royals have not seen it since 1985. It is not even on Royals’ skipper Ned Yost’s managerial resume. “It” is the baseball playoffs. You remember playoffs… that eight-letter word that former Indianapolis Colts head coach coach Jim Mora made famous.

The Royals in ’85 won the World Series. The franchise has not made it back to the post-season in almost three decades. Yost, who took over the Kansas City manager spot after 35 games in 2010, has never managed in the playoffs. He has, however, come close. In 2007 as skipper of the Milwaukee Brewers, Yost’s team had an 8 1/2-game lead in late June but could not hold on for a playoff spot. The next year Yost was fired by the Brewers with 12 games left in the season and the team fighting for a Wild Cord spot. The team went 7-5 under replacement skipper Dale Sveum and made the playoffs.

Yost is one of a handful of major league managers who has over 600 career wins as a manager but has never seen his team make the playoffs. Yost has 811 career managerial wins and his Royals this season are holding a slim 1 1/2-game lead in the American League Central. Could this be the year for Yost… and the Royals?

Note: Prior to the 1969 MLB season, it was much more difficult for teams to make the playoffs. Only two teams made the playoffs from the start of baseball’s birth until 1968: the American League and National League champs. Because of that, there are many managers who accumulated a boat-load of regular season wins in their careers yet never managed in the post-season. Here’s a look at managers prior to 1970 who had the most regular season wins without ever having their team make the playoffs.