Tom Brady vs. Peyton Manning: 20 stats you might not know

The marquee matchup in Week #9 is the Denver Broncos hitting the road for a game with the New England Patriots. It also means the 16th time that future Hall of Famers Tom Brady and Peyton Manning will face each other. Here’s a look at some of the stats from the previous 15 times that Brady and Manning have squared off in an AFC battle.

1. Brady has won 10 of the 15 games against Manning. The Patriots are 7-2 in home games against a Peyton Manning-led team. The last time Manning defeated Brady when New England was hosting the game was November 5, 2006.

14. Seven of the Brady-Manning matchups took place in November. The Patriots hold a slight 4-3 advantage in those games.

15. Eight of the 15 games played between Brady and Manning were decided by eight points or less. Only two games in the series were decided by 20 points or more; those were blowout wins by the Patriots in 2001.

16. Brady has had only one game of the 15 where his QB Rating for the game was under 70. Peyton had three games with a QB Rating under 70.

Every week in the NFL there is the potential for performances that are rare, historic or record-setting. Week #8 in the NFL was no exception. Here’s a look at a few stats you might have missed from last week’s games.

1. The Atlanta Falcons became the eighth team in the Super Bowl era (since 1966) to hold their opponents scoreless in the first half, score 21 or more points themselves in the first half, and then lose the game. The Lions eventually won the game 22-21 on a last-second field goal after the Falcons took a 21-0 lead at half. The last team to lose such a game was last year when Denver led 24-0 over New England at halftime and then lost 34-31 in overtime.

2. The Pittsburgh Steelers held a 35-20 lead over Indianapolis at halftime in their game on Sunday. It was only the 12th time in the Super Bowl era where one team scored over 30 points in the first half and their opponents scored over 20 in the same first half. Last time it happened was 2008 in a game where the Eagles led the Cowboys 30-24 at half.

3. Buffalo QB Kyle Orton became the first QB since Bubby Brister in 1990 to throw four TD passes with 10 or fewer completions in a game.

6. Buffalo rookie wide receiver Sammy Watkins had three receptions for 157 yards in Buffalo’s win over the New York Jets. It was the 16th time since 1966 that a player had 150 or more receiving yards in a game with three or fewer catches. The last player to do this was Victor Cruz in a 2011 game against the same N.Y. Jets. Watkins became the youngest player to accomplish this feat.

7. Seattle defeated the Carolina Panthers 13-9 in their Sunday game. It was the ninth time since 2000 that the Seahawks have won a game where they scored under 14 points. The Ravens lead that category with 12 wins with fewer than 14 points scored in a game. The Seahawks also did it last year against the Panthers; they defeated Carolina 12-7 in that game.

9. The Dolphins had a pair of interceptions returned for touchdowns in their 27-13 victory over Jacksonville. It was the 52nd game since 1966 where a team returned two or more interceptions for a TD. Teams are 49-3 in those games.

11. Both Tom Brady and Kansas City QB Alex Smith completed 85.7% of their passes in games on Sunday (Brady was 30-for-35; Smith was 24-for-28). It was the second consecutive week that two QBs had a completion percentage over 85% (minimum of 20 passes thrown) in the same week. Last week Aaron Rodgers and St. Louis’ Austin Davis did it. It had never been done two weeks in a row in NFL history.

Looking for an NBA title? Follow the Spurs 2013-14 blueprint 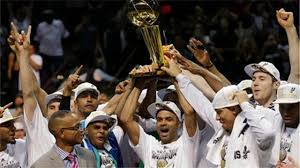 With the 2014-15 NBA season getting started last night, teams that are looking to challenge or overtake the defending champion San Antonio Spurs would do well to take a look back at the Spurs title run last season and copy that blueprint.

So, is accuracy in all three aspects of the shooting game that important in the NBA? The answer, at least from last year’s stats, is a resounding “Yes!”

It’s all about putting the ball in the basket!

NFL rookies are finding the end zone in 2014

When the 2014 NFL draft was held this past May, we heard a lot about Jadeveon Clowney and Johnny Manziel. Both were expected to come into the NFL and make an immediate impact on the league. We did not, however, hear much about John Brown (Arizona), Lorenzo Taliaffero (Baltimore) and Isaiah Crowell (Cleveland). Brown was a third-round pick, and Taliaferro ended up as the 138th pick (in the fourth round). Crowell, on the other hand, wasn’t even drafted.

Brown, Taliaferro and Crowell are three first-year players who are making an impact this season in the NFL. In fact, this trio of players is tied for third in the league for most TDs scored by a rookie, each with four scores. They are one score behind wide receivers Sammy Watkins (Buffalo) and Kelvin Benjamin (Carolina), who each have scored five times in their rookie campaigns.

While some teams this season have not had rookies play a major role in putting points on the scoreboard, there are a few teams that have seen first-year players play a major role in putting the ball in the end zone. The Jacksonville Jaguars lead the NFL through games played on October 26 with eight TDs scored by four different rookies. Carolina and Cleveland are second in the league, each with six TDs scored by first-year players.

Here’s a look at how many TDs have been scored by each team by rookies this season.

All total, there have been 39 rookies who have scored TDs this season. Jacksonville, as mentioned above, has had four different first-players score this season, most in the league. Both San Francisco and Tampa Bay have seen three rookies find the end zone this season.

Another interesting part of this stat is that of the 39 rookies who have scored TDs, seven were not even drafted. Eight of the 39 were drafted in the first round, but second-round players have done one better… nine. The rest of the 39: Four third-rounders; seven fourth-rounders; two sixth-rounders; and two seventh-rounders.

One final number: Six first-year rookies are putting points on the board for their teams as placekickers. Leading the way is Philadelphia’s Cody Parker who has scored 65 points for the Eagles. First-year Arizona kicker Chandler Cantazaro is close behind with 62 points. The other four: Kansas City’s Cairo Santos (50 points), Brandon McManus, Denver (46 points), Tama Bay’s Patrick Murray (37) and Detroit’s Nate Freese, who had 15 points before he was released earlier this season.

Packers Numbers Notebook: Stats from their loss to New Orleans

Here’s a look at a dozen stats that helped define the Green Bay loss to the Saints Sunday night.

2. The 21-point loss was the Packers third 20-point loss on the road in their last four away losses.

5. Aaron Rodgers threw a pair of interceptions. Green Bay is 6-5 in the 11 games where Rodgers has had two or more interceptions.

6. New Orleans running back Mark Ingram became the 13th opposing runner to have 170 or more rushing yards in a game versus the Packers. It was the 19th time since 1966 that an opposing runner had 170 or more yards rushing in a game against the Pack. Green Bay is 4-15 (.211 winning percentage) in those games. Three running backs had multiple games with 170 or more rushing yards against the Packers: Adrian Peterson  (4), Walter Payton (3) and Barry Sanders (2).

8. The Packers defense came into the game with New Orleans with the lowest opposing QB Rating at 74. Drew Brees’ QB Rating for the game Sunday night was 138.4. It was the 26th game since 1966 where an opposing QB had a Passer Rating of 130 or above against the Packers. Green Bay is 1-25 in those games.

11. Eddie Lacy had eight receptions for 123 yards. He was the first Packers running back to have over 100 yards receiving in a game since Dorsey Levens did it January 12, 1997 in a playoff games versus the Panthers. Levens had five catches for 117 yards in that game.