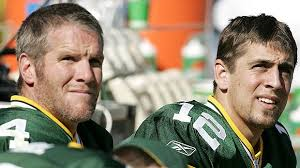 Aaron Rodgers last Thursday threw his 200th TD pass as a Packer when he connected with rookie Davante Adams on a score in the second quarter. Rodgers reached the 200 TD pass mark in his 99th game, the second fastest in league history behind Dan Marino who reached 200 TD passes in 89 games with the Miami Dolphins.

(We interrupt this blog for a trivia question… Five Green Bay quarterbacks have 75 or more career TD passes with the Packers. Obviously Favre and Rodgers are on that list. can you name the other three? Answer at the end of the blog.)

Here’s a look at those franchises that have two or more QBs with 200-plus TD passes.

Franchise, QBs with 200-plus TD passes

Trivia answer: Bart Starr (152), Lynn Dickey (133) and Tobin Rote (89) are the other three QBs who have thrown 75 or more TD passes in their career with the Packers.