Should T.Y. Hilton be mentioned with the NFL’s elite receivers? 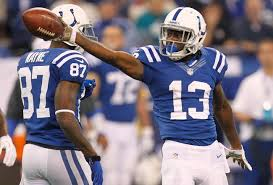 Indianapolis receiver T.Y. Hilton had a monster game in the Colts 33-28 win over Houston on Thursday night. Hilton caught nine passes for 233 yards and a TD. The 233 yards were a career-best.

What caught my eye in that game was that it seemed that whenever there was a big play, it was a pass play from Colts QB Andrew Luck to Hilton. Of Hilton’s 233 yards, 159 of those yards came on just four plays. Hilton had big-play receptions of 40, 49, 37 and 33 yards in the contest.

Big play receptions is not uncommon for Hilton. In fact, since Hilton came into the league in 2012 as the 92nd pick overall (from Florida International University) by the Colts, he has 26 receptions of 30 yards or more. That is the second most in that category since 2012 (Denver’s Demartyius Thomas leads the NFL in that category since 2012 with 27).

* The Kansas City Chiefs have allowed the most pass plays of 30 yards or more since 2012 with 65. The Houston Texans, who allowed Hilton to have four such plays last Thursday, rank second with 61.