Packers Numbers Notebook: Stats from their win over Miami 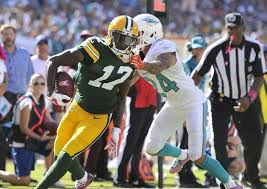 Here’s 10 interesting stats from the Packers 27-24 win over Miami yesterday.

2. John Kuhn carried the ball four times for 15 yards in yesterday’s contest. It was the most rushes in a game for Kuhn since he had four on December 2, 2012. The most carries Kuhn has had in a game with the Packers was 13 against the Cowboys on November 7, 2010. He also had a career-high 50 yards in that game.

3. With six catches for 77 yards, rookie receiver Davante Adams became the 12th first-year player to have six or more catches in a game for the Packers since 1966. The other rookies to accomplish this: Gerry Ellis, Sterling Sharpe, Keith Woodside, Kenneth Davis, Ruvell Martin, Lee Morris, Ryan Grant, Greg Jennings, LeShon Johnson, James Jones and Eddie Lacy. Ellis, Sharpe and Woodside each had eight receptions in a game, most by a Packers rookie in the Super Bowl era.

9. Jordy Nelson had another big game with nine receptions and 107 yards receiving. The Packers are 8-1 (including the playoffs) when Nelson has nine or more catches in a game; they are 15-2 in all games where Nelson has 100 or more yards receiving.