Royals finally get that return trip to the World Series 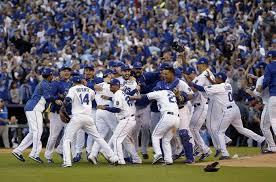 A celebration that was worth the 29-year wait

It took 29 years, but the Kansas City Royals are again headed back to the World Series. This year’s Fall Classic will begin on Tuesday in K.C.

Here’s a look at the longest wait between World Series appearances (current franchise name is listed).