The Houston Texans, led by J.J. Watt, was the NFL’s most improved team in 2014

Here’s three stats from the just-completed NFL regular season that you may find interesting.

Here’s a look at the NFL teams with 15 or fewer turnovers in a season.

* The Houston Texans were the most improved team in the NFL this season. The Texans went from two wins in 2013 to nine victories this season, an increase of seven victories. The biggest drop was a tie between Tennessee and Carolina; both dropped five wins from 2013 to 2014. Ironically, the Panthers still made it to the playoffs despite their five-win drop this season.

Here’s a look at the teams with the biggest gains (and drops) in wins for 2014.

Here are the teams with the most winning seasons since 1990 (when the NFL went to a 12-team format for the playoffs) that did not make the playoffs that year.

Winning record seasons but no playoffs (since 1990)
4: Kansas City, Miami

An omen for a Packers victory vs. the Lions?

If you are a Packers fan, you are probably looking for that one stat or fact that will give you hope that a Green Bay win is in the bag for Sunday. Well, here is one stat that may fit that bill…

To add to the above stat, can you guess which NFL team is tied for last on this list with a 7-16 record (a .304 winning percentage)? You guessed it, the Packers opponent on Sunday, the Detroit Lions.

Can the Cowboys finish 2014 undefeated on the road?

There’s a lot to celebrate in Dallas: An NFC East Division championship and an upcoming home playoff game. This Sunday the Cowboys are on the road facing the Washington Redskins. A victory in D.C. would not only finish their 2014 season, but it would signal a perfect 8-0 record on the road this season. And based on past history, an undefeated road record has been a good omen for the past 11 teams that reached that milestone.

Since 1966 (the start of the Super Bowl era), there have been 11 teams that were unbeaten on the road in a season. Of those 11, eight went on to play in the Super Bowl that year. Will the Cowboys become the 12th team to have an unblemished away record… and if they do, will that be enough to give them a spot in this year’s Super Bowl?

Here’s a look at the teams that were undefeated in road games in an NFL season (and how well they performed in the playoffs that season).

Packers Numbers Notebook: Stats from their win over Tampa Bay 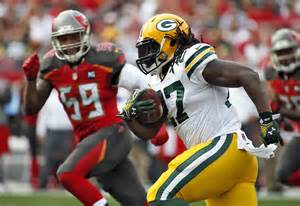 Here are a few stats you may not know from the Packers 20-3 win over the Bucs.

1. The Packers now hold a 31-21-2 advantage over Tampa Bay. They are, however, only 3-4 against the Bucs since 2002, and have only beaten Tampa Bay twice in the last nine trips into Tampa Bay.

3. Aaron Rodgers had one TD pass yesterday (a pass to Jordy Nelson in the fourth quarter). Why was it important for Rodgers to get that TD pass in the fourth quarter? Aaron has never had two straight games without a TD pass as the Packers starting QB. (He had 0 TD passes in the previous week’s loss to Buffalo.)

4. Randall Cobb had 11 catches for 131 yards in the contest. It was the 29th game where a Packers player had 10+ catches and over 100 yards receiving in a game. It was his second career game with these numbers, making him the eighth Packers receiver to have multiple 10 catch/100 yards receiving games. Donald Driver and Sterling Sharpe each had six such games in their careers. Others with multiple games: Robert Brooks, Antonio Freeman, James Lofton, Jordy Nelson and Javon Walker.

6. Green Bay had seven sacks against the Bucs, the 28th time in history that have reached the seven-sack mark in a game; they are 26-2 in such games. The Packers are 28-9-1 since 2000 when they have five or more sacks in a game.

7. The Packers have now reached the playoffs in six straight seasons, matching the 1993-98 Packers for the longest streak of consecutive post-season appearances.

8. Yesterday’s game was the 15th time since 2000 that the Packers have held opponents to three or fewer points in a game. The Pittsburgh Steelers lead the league with 20 games holding the opposition to three or fewer points this century. Baltimore has 19, Seattle and San Francisco are tied with 16 each. The Packers are tied with New England and Tampa Bay for fifth on this list.

10. Lacy had exactly 99 yards rushing in the contest, missing the 100-yard mark by a single yard. It was his second 99-yard rushing game in his short career with the Packers. He is now tied with Dorsey Levens for most 99-yard rushing games as a Packer with two.