Packers Numbers Notebook: Stats from their 26-21 win over New England 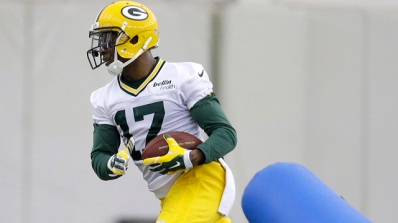 Here are some stats you might not know from Green Bay’s win over the Patriots.

4. Green Bay and New England played the eighth turnover-less game in the NFL this year. It was the Packers first such game this season; the Patriots have now played in two such games.

5. Rookie receiver Davante Adams led the Green Bay receivers with six catches for 121 yards. It was the 10th game in Packers history that a rookie receiver had 100 or more yards receiving in a game and the first since October 29, 2007 when James Jones had three catches for 107 yards. Adams is the eighth rookie receiver to have 100-plus receiving yards in a game (Greg Jennings and Sterling Sharpe did it twice in their rookie campaigns). The other four rookies to have 100 or more yards receiving in a game: Ruvell Martin, Lee Morris, Gerry Ellis and James Lofton.