Week #14, Packers vs. Falcons: Stats you may not know about the Packers 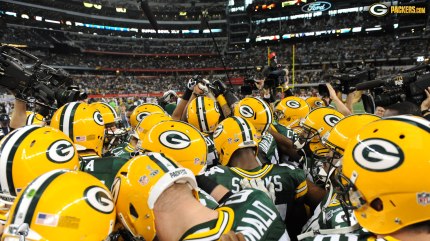 With the Packers hosting the Falcons tonight, here’s a look at a few stats you may not know about the Pack:

1. Running back Eddie Lacy is one of four players that have 700 yards rushing and 300 yards receiving after 12 games.

2. Randall Cobb and Jordy Nelson each have 10 TDs this season. The only other team to have two players with 10 or more TDs are the Denver Broncos (Demaryius Thomas and Julius Thomas). Eddie Lacy’s next TD will give him 10 for the season.

3. Aaron Rodgers is one of only two QBs this season with 25 or more sacks and a QB Rating over 100 (Rodgers has 25 sacks and a QBR of 118.6). The other QB? Ben Roethlisberger of the Steelers.

4. Through 12 games, the Packers have had the fewest number of offensive drives with 126. However, they have scored on the highest percentage of their drives, 48.4%.

5. Green Bay has scored nine TDs of 50 yards or more (six offensive TDs, two interceptions for TD and a punt return for TD). They have given up only two TDs of 50-plus yards… a kick-off return to the Bears and a 50-yard pass play to the Saints.

6. The Packers have had only one turnover since their bye week (Week #9). They have had no turnovers in the last three games. Until they played in the turnover-less game against the Patriots last week, the Packers had a takeaway in 11 straight games.

7. The Packers opponent tonight, the Atlanta Falcons, have 32 overall TDs this season. The Packers have 32 passing TDs of their 46 overall touchdowns.

8. Green Bay has punted only 39 times this season. The only team with fewer punts this season through 12 games were the Baltimore Ravens with 38.

9. The Packers defense is one of six teams in the NFL this year with three interceptions returned for TD.

10. The Pack have had only 6.3% of their offensive drives this season end with a turnover. Only the Seattle Seahawks have a lower percentage (5.4%).

12. While the Packers rank third in the league with 32 TD passes, they rank 23rd in the NFL with most pass attempts.

13. Green Bay ranks first in the league through 12 games in turnover ratio (takeaways/turnovers). The last seasons where the Packers led the league in this category were 2009, 2002 and 1965.