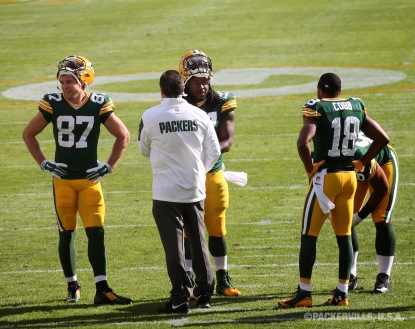 With his first quarter rushing TD versus the Atlanta Falcons on Monday night, Green Bay Packers running back Eddie Lacy scored his 10th TD of the season (he later scored #11 on a pass from Aaron Rodgers). Lacy joined fellow Packers Jordy Nelson and Randall Cobb as Green Bay players who have scored 10 or more TDs this season. (Nelson now has 12 for the year, Cobb has 10.)

This Packers trio joined an elite group of players/teams that have had three players score 10-plus TDs in a season, becoming the 13th team in football history to do so. The Denver Broncos joined this club last year, but they did it in record fashion: The Broncos had five players who scored 10 or more TDs last season (Eric Decker, 11; Knowshon Moreno, 13; Demaryius Thomas, 14; Julius Thomas, 12 and Wes Welker, 10).

Here’s a look at the teams that have had three (or more) players score 10-plus TDs in a season.

With three games remaining this season, the Packers trio of Cobb, Lacy and Nelson could establish some new marks for TDs. If each player gets 12-plus TDs for the season, they would become only the third team to have three players with 12-plus TDs in a season (joining 1961 AFL Houston and the 2013 Denver Broncos). Should they each reach 13 touchdowns, they would become the first team in NFL history to have three players on a team reach 13 or more TDs in a season.