Packers Numbers Notebook: Stats from their playoff loss to Seattle 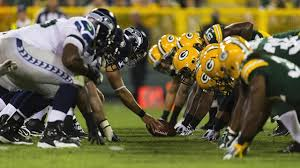 Here are a few stats you may not know from the Packers 28-22 overtime loss to Seattle in the NFC Championship Game.

2. Green Bay scored first in the game and are now 19-10 in playoff games when they score first.

5. Mason Crosby kicked five field goals for the Packers in the contest, becoming the ninth placekicker since 1966 (the Super Bowl era to have five or more field goals in a playoff game. Kickers are 6-3 in these playoff games when they kick five-plus field goals  for their teams.

6. Clinton-Dix became the fourth Green Bay player to have two or more interceptions in a playoff game. The others: Sam Shields (1/23/2011), Tramon Williams (1/15/2011) and Eugene Robinson (1/4/1997). It was the first time the Pack lost a playoff game when one of their players intercepted two or more passes in a game.

10. The Packers became only the second team in the playoffs since 1966 to have four or more interceptions and lose the game. Defenses with four-plus interceptions in a game are now 42-2 in playoff games since ’66.

11. Green Bay allowed Seattle to score 15 points in the fourth quarter, the second time in their playoff history that they have allowed an opponent to score 15 or more in the last period. The other game was a 37-20 playoff loss to the New York Giants on January 15, 2012.

13. This was only the seventh playoff game in Packers history where they scored only one offensive touchdown. They are 3-4 in such games.

16. In the Super Bowl era (since 1966), there have been 27 playoff games that went to overtime. The Packers have now lost four of those games, most in the league.