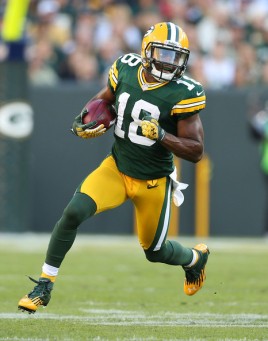 Green Bay Packers fans were pleased when the team found a way to keep free agent Randall Cobb on the team. It keeps the 1-2 receiving combination of Jordy Nelson and Cobb intact for another season (and more).

But did you know that Cobb’s ability to run the ball is one of the most unknown stats in the NFL? From my just-completed book, “250 Stats Every Packers Fan Needs to Know,” here’s stat #55…

Cobb had 11 carries last season for only 37 yards, a mediocre 3.3 yards per carry average. But the team may want to find creative ways to get him the ball in a running play much like they did in 2012 and 2013 when he carried the ball 14 times for 210 yards, an average of 15 yards per carry.