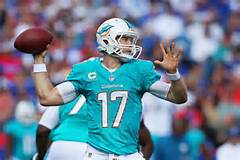 Miami Dolphins’ QB Ryan Tannehill is typically not included in the list of today’s top quarterbacks. Last Sunday, however, Tannehill wrote his name in the record book with some elite QB’s with a performance that led the Dolphins to a 44-26 win over Houston.

Here’s a few stats from that game that you may not know about Tannehill’s eye-opening numbers. He was 18-for-19 for 282 yards, four TD passes, and a perfect 158.3 Quarterback Rating (QBR).

Jerry Tapp is the author of the recently-published book, “250 Stats Every Packers Fan Needs to Know”