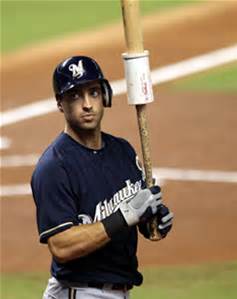 Milwaukee Brewers left fielder Ryan Braun last season on August 19, 2015, hit career HR #252, giving him sole possession of the most career homers in Brewers team history. Also last season he collected career stolen base #150, and earlier this year he got his 1,500th base hit. Braun has played his entire 10-year career with the Brewers (we’ll see if he finishes the year with the team considering he is the constant focus of trade talks).

When he got his 1,500th hit, Braun joined a very select group of players: He became the 19th player in MLB history to have 1,500 hits, 250 home runs and 150 stolen bases with one team. Braun became the second Brewers player to reach these numbers; Robin Yount played all 20 of his MLB seasons with the Brewers amassing 3,142 hits, 251 HRs and 271 stolen bases.

The Brewers are one of only six teams to have two or more players in this 1500-250-150 group. The others: Houston, New York Yankees, Atlanta, Chicago Cubs and San Francisco. Nineteen of the 32 MLB teams do not a player in this group.

Following are the teams with a player who has/had 1,500 career hits, 250 career homers, and 150 career steals with that team.