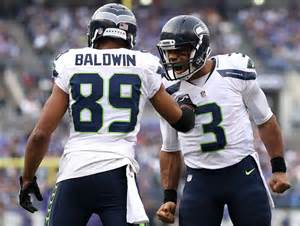 Seattle Seahawks wide receiver Doug Baldwin had quite a day yesterday in Seattle’s 26-15 win over Philadelphia. Baldwin had four receptions for 104 yards and threw a pass to QB Russell Wilson for a TD in the third quarter. His 15-yard TD strike to Wilson gave Baldwin a perfect Quarterback Rating (QBR) for the game.

The TD pass by a non-QB isn’t all that uncommon, but when you take into account that Baldwin tossed a TD pass and went over 100 yards in pass receiving, that’s what made his game historic.

Baldwin became the 13th player in NFL history to have 100 or more yards receiving and throw a TD pass in the same game. The last player to achieve this rare double was Mark Clayton on November 30, 2008 when he was playing for the Baltimore Ravens versus Cincinnati.

Here’s a look at the eight players who have thrown a TD pass and had 100 or more yards in pass receiving in the same game since 1970, the AFL-NFL merger.