NBA Stats: When was the last time your team was in the conference finals? 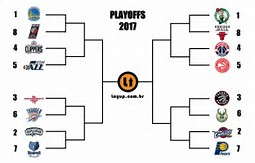 The second round of the NBA playoffs will get started this week. Of the four teams that made it to the conference finals last year (Cleveland, Golden State, Oklahoma City and Toronto), it looks like only two might return this year… OKC was eliminated in the first round this year by Houston, and Cleveland and Toronto will face each other in the second round this season, with one of them advancing to the conference finals again. Golden State would be the second team if they can advance past the winner of the Utah-L.A. Clippers series winner.

Here’s a look at the 30 NBA franchises and the last year they appeared in a conference finals series. (Current franchise city is listed.)