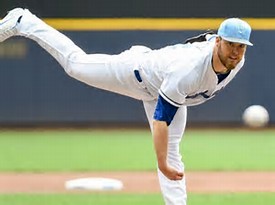 Last Sunday, June 18, on Father’s Day, Jimmy Nelson gave the Brewers their first complete game of the season, a 2-1 win over the Padres. It was Nelson’s first career complete game after 88 career starts with the Brewers without one.

Here’s a look at the Brewers starting pitchers who have started the most games in team history without a complete game in the stat column.

A pair of current Brewers hurlers, Zach Davies and Chase Anderson, could soon be joining the above list. Davies now has 49 starts in a Brewers uniform without a complete game, while Anderson is close behind with 45.

Brewers reliever Corey Knebel on June 22 set a new record by recording a strikeout in his 38th straight game to start a season by a relief pitcher.

The MLB record for most consecutive games by a pitcher with at least one strikeout is 411 by Tom Seaver. Nolan Ryan is second with 382 games, followed by Curt Schilling with 378 straight games with a strikeout.