Stats you may not know about the 1982 Milwaukee Brewers 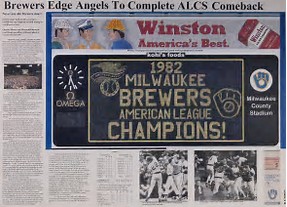 The Milwaukee Brewers this weekend are honoring the 1982 team on the 35th anniversary of that team winning the American League championship. Here’s a handful of stats you may not know about that team.

The MLB record for most career grand slams is held by Alex Rodriguez with 25. He is followed on this list by Lou Gehrig (23) and Manny Ramirez (21).