Will Brewers pitching staff have a 20-game loser this season? 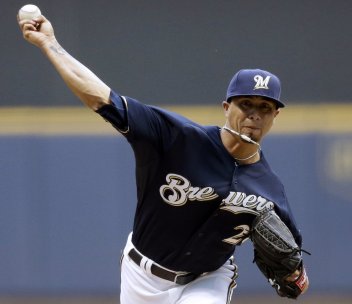 When you have the second-worst record in the majors you are bound to have more than a few times when your team or your players’ names will appear in a negative stats column. Case in point: The Brewers have two pitchers who are among the six tied for the most pitching losses this season with nine. Matt Garza and Kyle Lohse each have lost nine games (through games of Sunday, June 21); Garza  is 4-9, while Lohse has a 3-9 record. That means that Garza and Lohse (and the other four hurlers with nine defeats) are on a pace to lose 20 for the season.

There are a lot of reasons for the decline in 20-game losers in baseball: The increased dependence on bullpens, fewer starts by pitchers, and starting pitchers who are taken out of games when they can’t lose the game (they are replaced when the tying run is at the plate and the relief pitcher takes the loss if more runs score).

The reason I think 20-game losers have become a rare breed is simply that teams, managers, players (and agents) don’t want to see pitchers tabbed as a 20-game loser. Because of that, teams are shutting down starting pitchers when they get to 18 and 19 losses for the season. There’s some mythical sore arm or other malady, or the team is looking to give others pitchers more work. That way the staff doesn’t have the stigma of having a 20-game loser. Note: Since 1980 there have been 39 pitchers who lost 18 or 19 games in a season.

So, will the Brewers have a 20-game loser in 2015? First, there is still a lot of season left and the team could turn things around and start winning a little more. That would certainly lessen the chance of one of their pitchers losing 20 games. If, however, their season continues with winning less than 40% of their games, the possibility will increase. My opinion is that there will not be a 20-game loser in Milwaukee. Trades are likely where Garza and/or Lohse could be dealt to teams looking for a middle of the rotation starter for a pennant run; if either is still around towards the end of the season and approaches 20 losses, I think the club will shut them down and go with youngsters to give them a chance.