Opening Day starters for the Brewers

Opening Day for baseball in 2020 is still a mystery. That shouldn’t, however, stop us from looking at some previous Opening Day lineups for the Brewers.

Here’s a breakdown for the last time a player started on Opening Day at the same position in consecutive seasons for the Brew Crew.

Here are the players with the most Opening Day starts at each position in Brewers history.

Brewers Trivia: How well do you know the team?

With professional sports on a sort of hiatus because of the Coronavirus, there’s not much stat analysis to write about. How about a little trivia?

Here’s three trivia questions for Brewers fans. Try to read the questions and guess the answers before skipping down to the answers.

Answer #2: Trick question. The Brewers have never had one of their managers finish first in the voting for a Manager of the Year Award. There have had four Brewers managers who finished second in the voting for the award: Tom Trebelhorn (1987), Phil Garner (1992), Ron Roenicke (2011) and Craig Counsell (2018 and 2019).

Players who played their entire MLB career with the Brewers 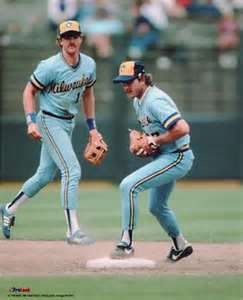 Can you name the five players who played their entire career with the Brewers (minimum of 500 games)? Hint: Two of them are currently on the Brewers roster. (Answer to follow)

It’s pretty rare to find a player who spends their entire MLB career with one team, especially if that career has a lot of mileage. Of the 22 players who played 2,800 or more games in the majors in their careers, only seven played all of their games with one team (Carl Yastrzemski, Stan Musial, Cal Ripken, Jr., Brooks Robinson, Robin Yount, Craig Biggio and Al Kaline).

Here goes… the 12 players who played (or have played) 200 or more career games in the majors, all with the Brewers.

How well did you do on the trivia question? Yount and Gantner were easy; Braun and Lucroy was pretty easy guesses, especially with the hint, but Nilsson… that one I would have missed.

A pair of Brewers who were on the roster last year would have been on the above list but are no longer in the organization. Khris Davis was traded to Oakland few weeks ago; he had 321 games with the Brewers and will most likely add a few MLB games to his career with the A’s. Logan Schafer  has 292 games with the Brewers in his career, but is now in the Washington Nationals organization.

The Milwaukee Brewers have 21 stolen bases this season which is right at the National League average. Carlos Gomez leads the team with five steals.

Second Base: Jim Gantner (137 stolen bases). Gantner will likely be supplanted by Weeks in the next couple of years in this category. Gantner averaged nearly 15 steals per season from 1985-90. His year-high was 20 in both 1988 and ’89. Reserve: Rickie Weeks (102 stolen bases)

Third Base: Paul Molitor (412 stolen bases). The Brewers career leader in stolen bases. He finished his career with 504 steals. He has four of the top 10 best single-seasons for steals in team history. Reserve: Don Money (66 stolen bases)

Outfield: Robin Yount (271 stolen bases). Had 10 or more steals in 16 of his 20 seasons with the Brewers. The only Brewers player in history to have over 200 career home runs and over 200 career steals.

Tommy Harper (136 stolen bases). More than half of his steals as a Brewer came in 1969 when he led the league with 73 bases with the Seattle Pilots. His 73 steals is the Brewers single-season record.

Scott Podsednik (113 stolen bases). Spent only two seasons with the Brewers. Had 70 steals in 2004 that led the National League. He and Harper are the only two Brewers to have 70-plus steals in a season.