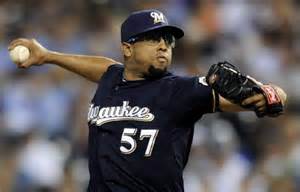 For Brewers fans in 2015, there wasn’t much to cheer about. Sure there were a few bright spots like Khris Davis leading the team with 27 home runs, solid bullpen work from Jeffress and Smith, and a few rookie starting pitchers that showed some promise.

But the absolute bright spot for the season was closer Francisco Rodriguez. “KRod” had 38 saves, a 2.21 ERA and had only two blown saves. On a team that finished under .500 (.420 winning percentage to be exact), KRod’s performance was noteworthy on several points.

These stats are impressive for a closer pitching for a losing team, but if we take the “pitching for a team that had a losing record” out of the equation KRod still had an impressive year for any pitcher. Consider this: