Scherzer also became the 10th pitcher in MLB history to win the Cy Young Award three times. Roger Clemens tops this category as a seven-time honoree. The 10 players to win three or more Cy Youngs: Roger Clemens, Randy Johnson, Steve Carlton, Greg Maddux, Sandy Koufax, Pedro Martinez, Jim Palmer, Tom Seaver, Clayton Kershaw and Scherzer. Of the 10 listed, seven are in the Hall of Fame… Scherzer and Kershaw are still active; Clemens has not been voted in to the Hall.

Pitchers with no-hitter and one-hitter in the same season 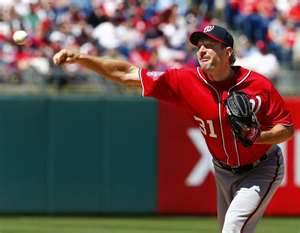 Back on June 14 Washington’s Max Scherzer tossed a one-hitter versus the Brewers. In his next start six days later, Scherzer did it one better by pitching a no-hitter against the Pirates. In tossing a one-hitter and a no-hitter in the same season, Scherzer became the 24th pitcher in the last 75 years to do so.

Here’s a rundown of those 24 pitchers in the last 75 years with both a no-hitter and one-hitter in the same season.

Washington Nationals pitcher Max Scherzer tossed a one-hitter yesterday against the Brewers striking out 16. It was the first one-hitter of this 2015 season and the first of Scherzer’s career.

Scherzer became the 604th MLB pitcher since 1914 to throw a complete game one-hitter. It was the first one-hitter since the Cubs’ Jake Arrieta had a one-hitter versus the Reds last year on September 16. There were six one-hitters in the majors last year.

Here’s a look at the pitchers who had four or more one-hitters in their career.

6: Steve Carlton, Bobo Newson (Note: Carlton and Newson both did not have a no-hitter in their careers, giving them the most one-hitters in a career without a no-hitter)

* Thirty-six pitchers have lost a game where they pitched a complete game one-hitter. The last was Detroit’s David Price on August 14, 2014. Price surrendered one hit and an unearned run in the Tigers’ loss to Tampa Bay.

* There have been seven post-season one-hitters. The last one was Roger Clemens on October 14, 2000.

* The last pitcher to pitch a complete game one-hitter in a World series contest was Jim Lonborg on October 5, 1967.

Congratulations to Clayton Kershaw and Max Scherzer for winning this year’s Cy Young awards. For Kershaw, it was his second Cy Young honor in three years, while this was Scherzer’s first. Kershaw becomes the 16th pitcher in major league history to win two or more Cy Young awards in his career.

Here’s six stats you might not know about these pitchers and their honors.

1. Of the 16 pitchers who have won multiple Cy Young awards, Kershaw became the fifth pitcher to win his second award before his 25th birthday (he is also the first left-hander to accomplish this feat). The others: Roger Clemens, Tim Lincecum, Denny McLain and Bret Saberhagen.